Rev. Ronald H. Guettler was born in Columbus, Nebraska, on February 11, 1934, to Armin H. Guettler and Clara H. Genz. He attended Immanuel Lutheran School and Kramer High School. After graduation he attended St. John=s College in Winfield, Kansas, and graduated with an A.A. in 1952, after which he attended Concordia Seminary in St. Louis, Missouri, graduating in 1957. Rev. Guettler vicared at Bethany Lutheran Church in Vacaville, California, 1955-56, under Rev. Robert Wolter, of Fairfield. During this time, he built his first church working with a number of laymen. 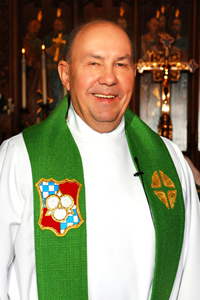 He helped to build a new church building which was dedicated on January 22, 1973. During his pastorate at St. Paul’s, he supervised 26 vicars and over a half dozen parish assistants. Rev. Guettler retired from St. Paul on June 30, 1996.

During his pastorate, Rev. Guettler has served the Michigan District and community in various capacities: Served on the Michigan District Church Extension Board from 1977-80, as Vice-President one year…Served as Chairman of the Church Extension Board from 1983-1995. Served on the Mission Board, 1962-1970. Was Counselor for Flint Zone Walther League. Served on ad hoc committees with the Board of Stewardship and the Board of Education. Served on the Building Committee of the student chapel at Central Michigan University, Mt. Pleasant, Michigan. Served as chaplain for the Lutheran Hour Reformation Rally at Cobo Arena. Served as delegate to the Lutheran Church-Missouri Synod Convention in Milwaukee, Wisconsin, 1970. Served as chairman of Campus Property Study Committee and Campus Task Force. Served as secretary and chairman of the Royal Oak Pastors’ Association. Served as chaplain to the Royal Oak Police and Fire Departments for ten years.