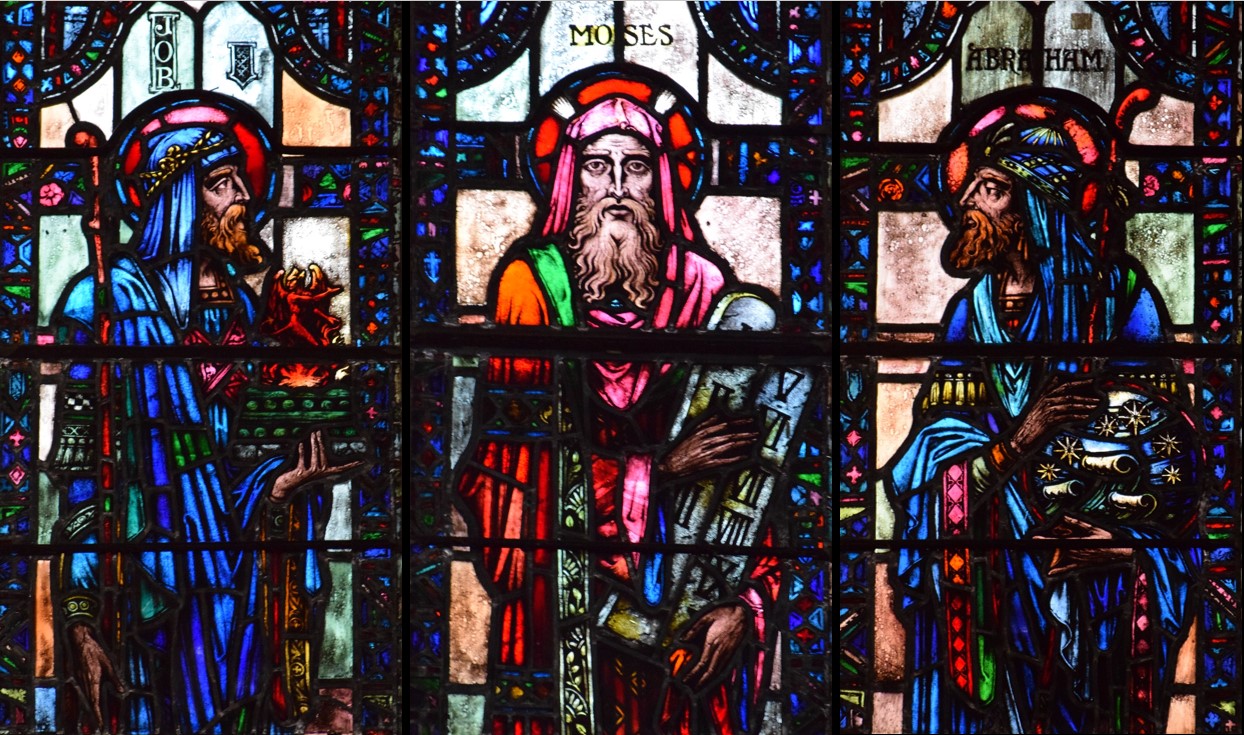 JOB is shown holding an altar from the flames of which is springing up a devil who tried to induce Job to give up his worship of God. The predella subject: Job is in his affliction in discussion with his three friends. The canopy subject: Job after his ordeal, once more returned to happiness and wealth with his children on his knee and the horn of plenty at his feet. The shield is symbolic of his physical sufferings.

MOSES is shown holding the tablets of the law and with the hornlike nimbus projecting from his head. The border is of Egyptian design symbolic of his childhood in Pharaoh’s court while the hem of his garment is made up of conventional serpents symbolic of him and his brother Aaron casting their rods before Pharaoh. The predella subject: Moses destroying the tablets of the law when on his return from Mt. Sinai he finds the children of Israel worshipping the golden calf. The canopy subjects: Moses in the wilderness lifting up the serpent, while the shield above shows Moses striking the rock to bring forth water.

ABRAHAM holds the globe showing the stars of heaven and the sand of the sea, symbolic of God’s covenant. The predella subject: Abraham about to sacrifice Isaac, but is stopped by the angel of God who is shows him the ram caught in a thicket close by. The canopy subject: Abraham entertaining the three strangers – the shield above the hand of God, symbolic of Abraham’s talk with God. 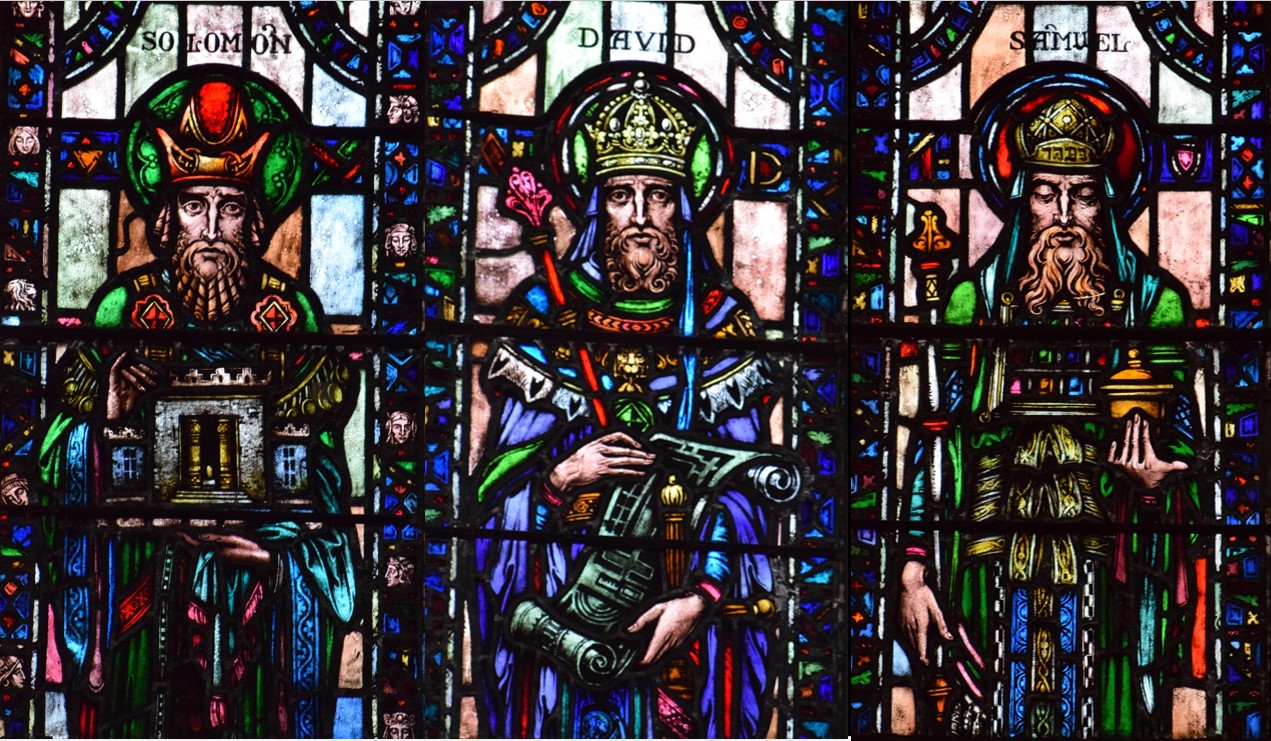 SOLOMON holds the completed temple, while in the predella angels bear jewels symbolic of the great wealth of his kingdom. Also, there are compasses symbolic of his vast building undertakings. On the shield is a lamp of knowledge and scales of justice. In the canopies are angels of praise, prayer and thanksgiving.

DAVID is shown in his kingly robe, with the scepter of his mighty power in one hand and a sword in the other. His cape is bedecked with ermine, jewels and a girdle of a lion’s head, while on his stole, is a portrayal of David as a young man playing the harp and also David with the head of Goliath. In his hand is a portrayed a temple for which he prepared plans, but which he was forbidden to build since he had taken the lives of many. The predella shows David and Jonathan, the symbol of great friendship.

SAMUEL is shown as a prophet, a priest and a judge from Jehovah. In one hand is the scepter of his judgeship, in the other is the pot of anointing oil with which he anointed Saul and David as king. In the predella, the angels bear the censor and the trumpet. In the shield is an altar, symbolic of Samuel’s being consecrated to the sanctuary by his mother. 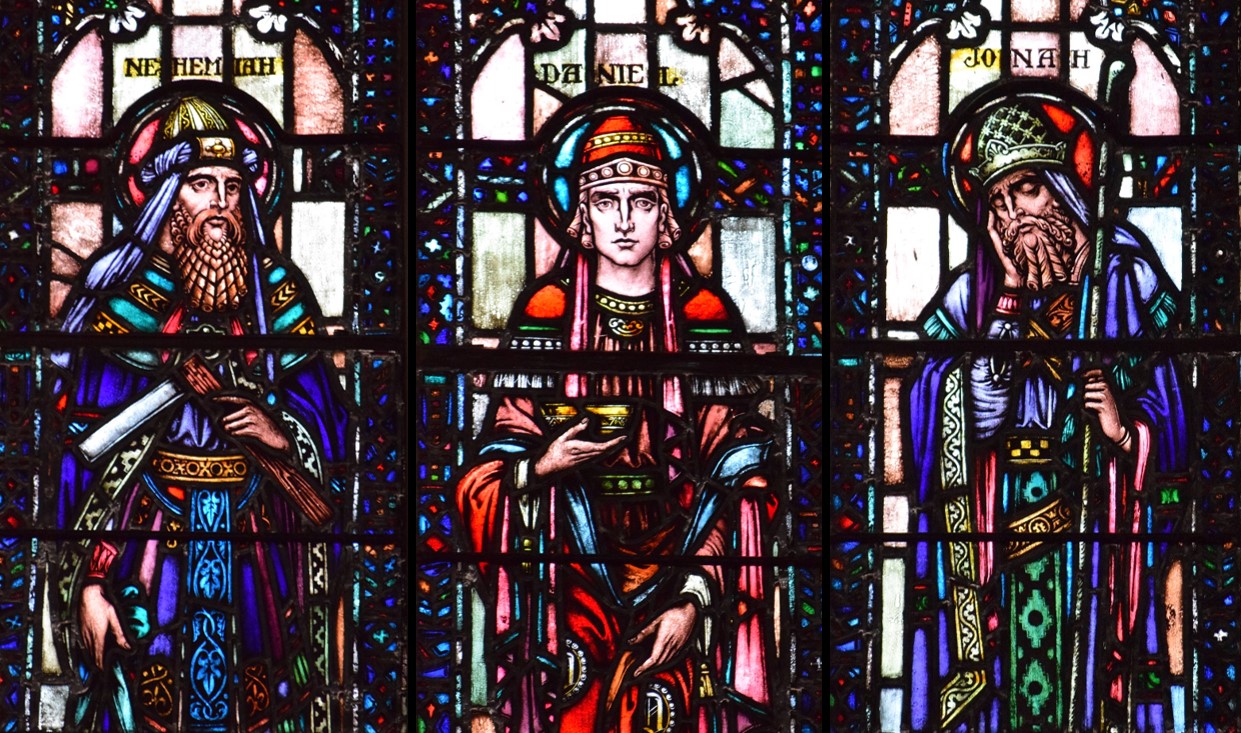 NEHEMIAH holds in his hand the builder’s square. In the predella is shown Nehemiah in the act of rebuilding the wall of Jerusalem, having obtained permission from King Cyrus, which scene is shown in the canopy. The shield shows Cyrus’ decree signed with the royal signet.

DANIEL is shown dressed as a Babylonian prince; in his hand he holds the cup symbolic of the fact that he was cup bearer to the king. In the predella is shown Daniel interpreting the handwriting on the wall at the feet of Belshazzar, while in the canopy above is shown Daniel in the lion’s den, and the iron bars can be seen the king looking in to see Daniel’s fate. In the shield above are shown Daniel’s three friends Shadrach, Meshach, and Abednego coming out unharmed from the fire.

JONAH is shown in a characteristic complaining pose holding in his hand a staff symbolic of his journeys. The predella shows Jonah being cast up on dry land by the whale, while in the canopy Jonah is complaining to God because the gourd tree is became barren and the hot sun beat upon him. In the shield is shown the ship in which he tried to flee from the presence of the Lord. 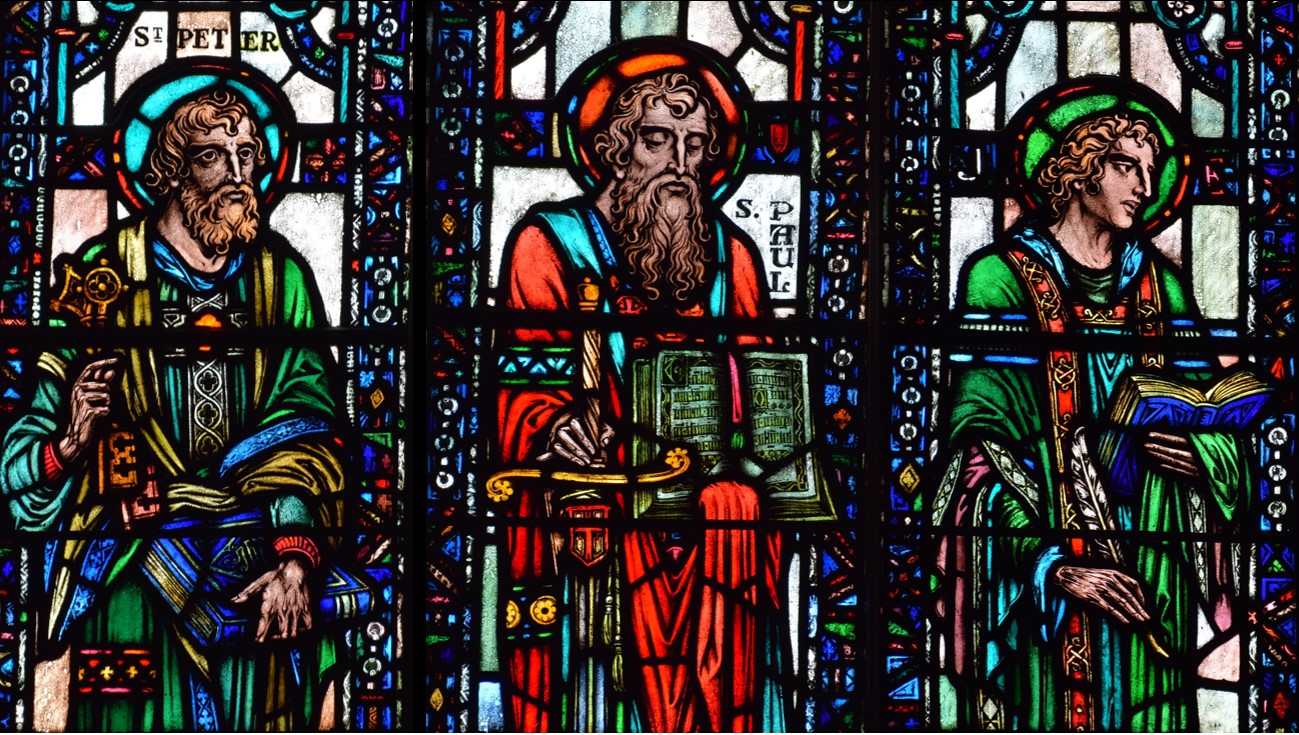 PETER holds in his hands the book and keys while at his feet is the cock which crowed at the time of his denial of Our Lord. The predella shows Peter attempting to walk on the water. In the canopy above is the scene of his denial. The shield shows a church on a rock symbolic of his aid of his aid in founding the apostolic church.

PAUL has is one hand the book symbolic of his many epistles, and in the other sword symbolic of his martyrdom, while at his feet a ship under the full sail standing for his missionary journeys. The predella shows Saul’s conversion on the way to Damascus, and above in the canopy, Paul before Agrippa, while the shield shows Paul in prison.

JOHN holds the Epistle and the pen in his hand, while at his feet is the eagle. The predella portrays the call of John to discipleship and the canopy shows John at the Isle of Patmos writing the apocalyptic vision. The shield shows the fish symbolic of his occupation. 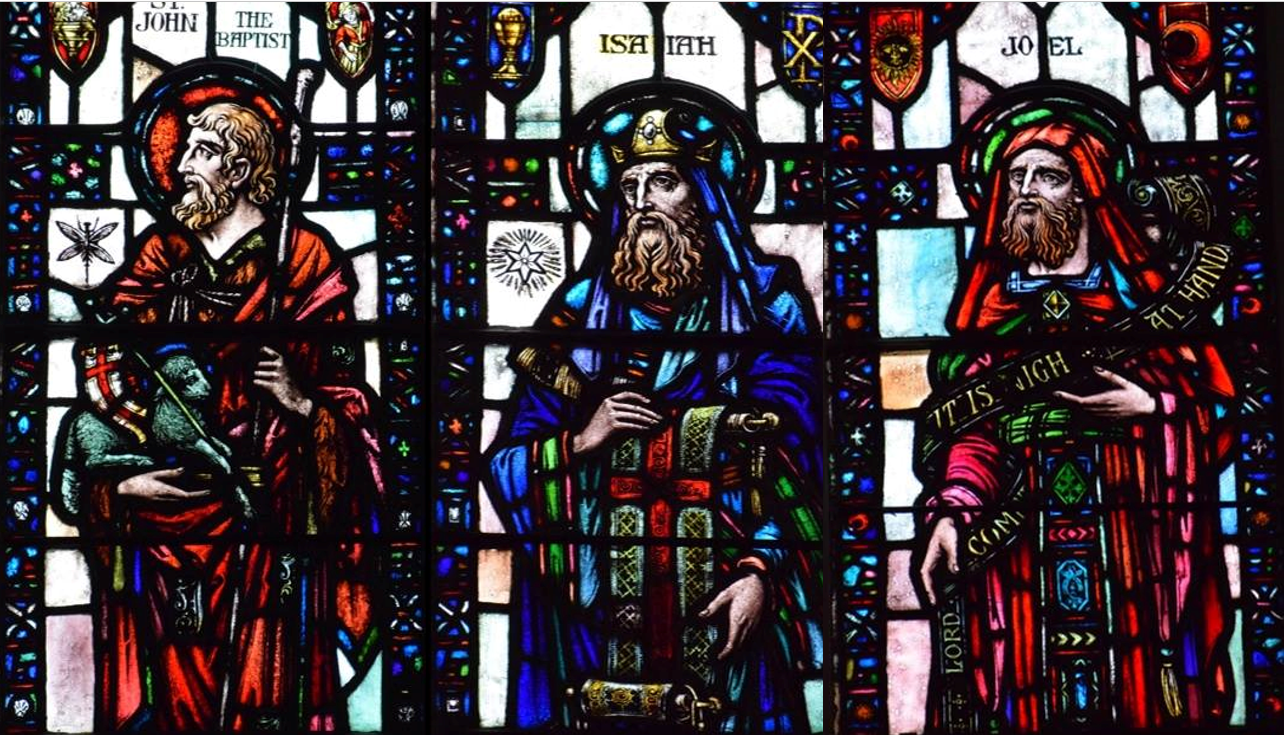 JOHN THE BAPTIST, ISAIAH AND JOEL

JOHN THE BAPTIST carries in his arms the Lamb of God whose way he prepared and whom he baptized. The predella shows John exhorting the people in the wilderness to repent and make straight in the way of the Lord, while in the canopy above is shown the young John the Baptist in the home of Mary with the child Jesus. One shield shows Salome and the other the platter with the head of John the Baptist resting thereon.

ISAIAH holds a scroll on which is shown the prophecy of the coming of the Savior and His vicarious sacrifice. The predella below shows Isaiah making that great prophecy: “Unto us a child is born, unto us a son is given and his name shall be Emmanuel, Prince of peace, Lord of lords, God of gods.” In the canopy is the sorrowing servant of Isaiah treading the wine press alone. One shield shows the chalice and the host; the other shows the PXC.

JOEL holds in his hand the scroll on which is written, “The day of the Lord cometh, it is nigh at hand.” The predella subjects shows the angel of God blowing the trumpet at the judgement, and the manmade walls crumbling while above is Christ in judgement. The shields at either side of Joel’s hand show the darkened sun and the bloody moon. 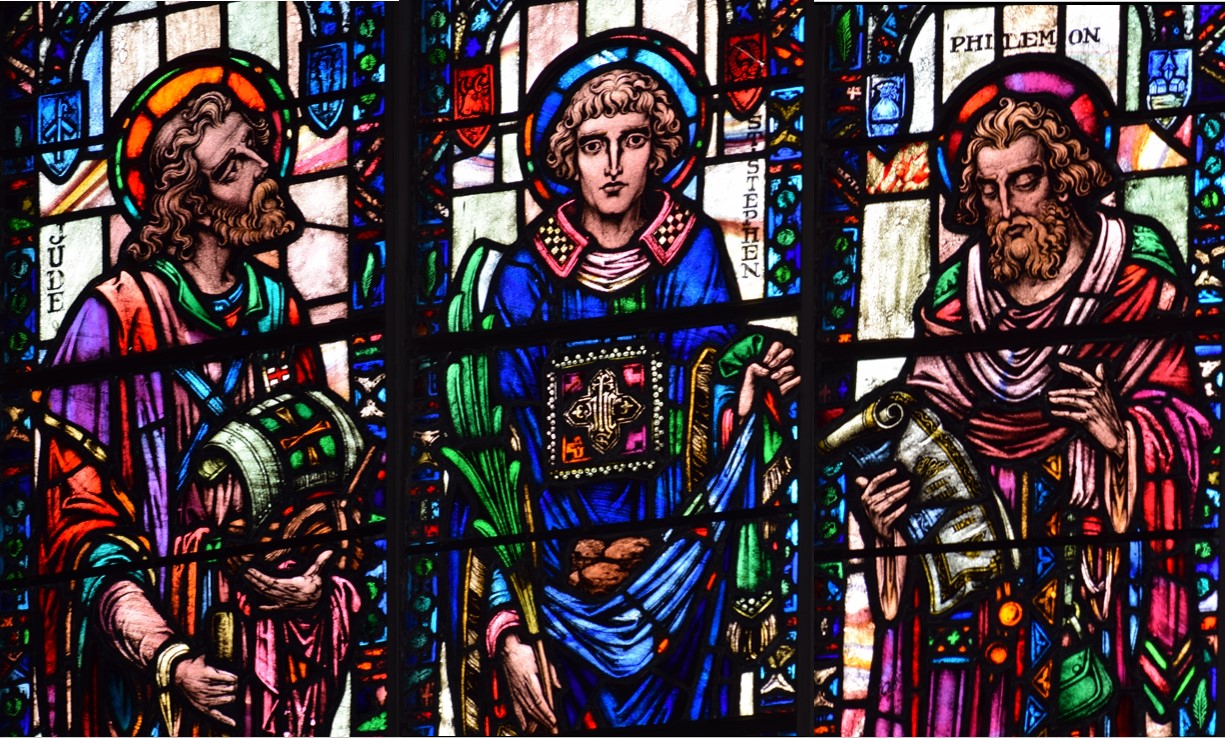 JUDE holds the club with which he was martyred and a ship symbolic of his journeys. The shields contains his various symbols.

STEPHEN, the first Christian martyr, holds in his hands stones symbolic of his martyrdom, and the palm, symbolic of his victory in the Lord. The predella shows the stoning of Stephen with Saul standing by, holding the cloaks of the persecutors. The shields show his symbol of the martyr’s wreath. 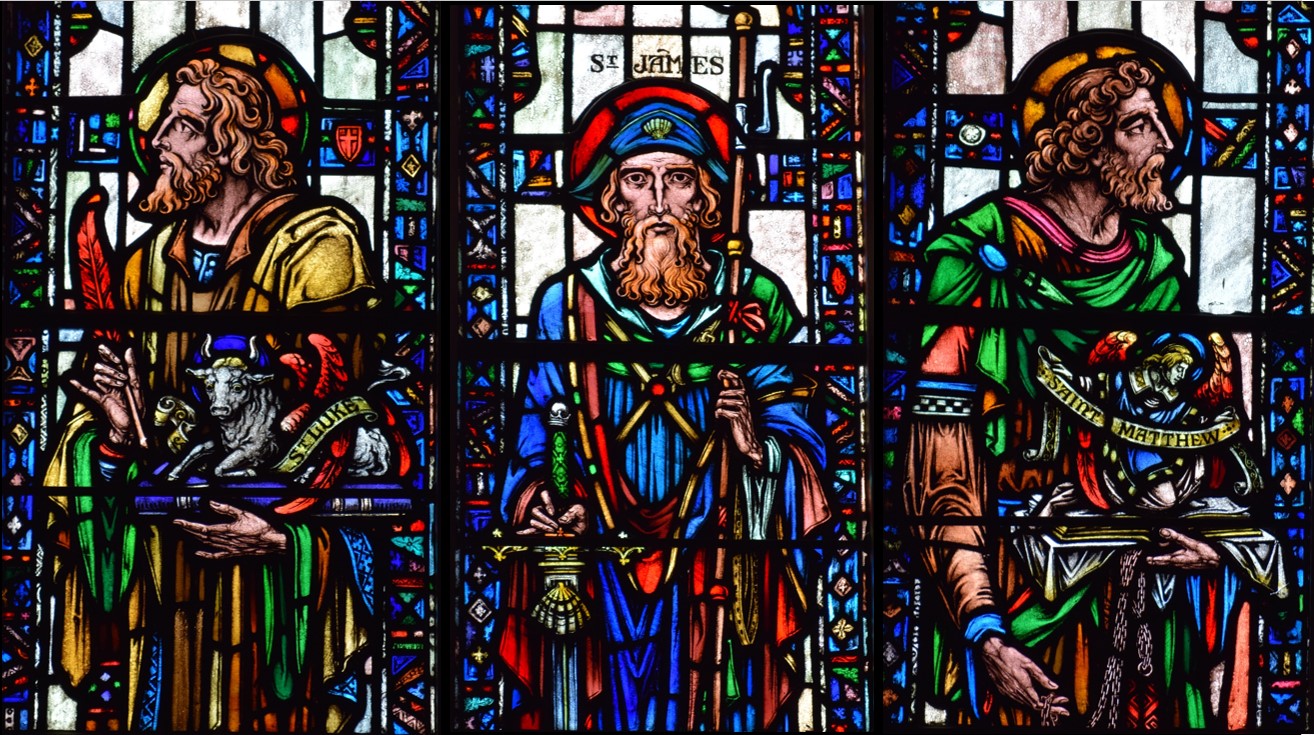 LUKE carries the book and pen symbolic of his writings while on the book is symbol, the bull. The shield in the canopy has the mortar and pestle, his symbol the physician.

JAMES holds in one hand the pilgrim’s staff and in the other the sword of his martyrdom, while in the predella below is James on his missionary journeys through Spain. The shield contains James’ symbol, a shell.

MATTHEW has in his hand a book on which is superimposed his symbol, a man, while at his side hangs the money bag symbolic of his avocation as tax collector. The hem of his garment is made up of Roman coins bearing the head of Ceasar. 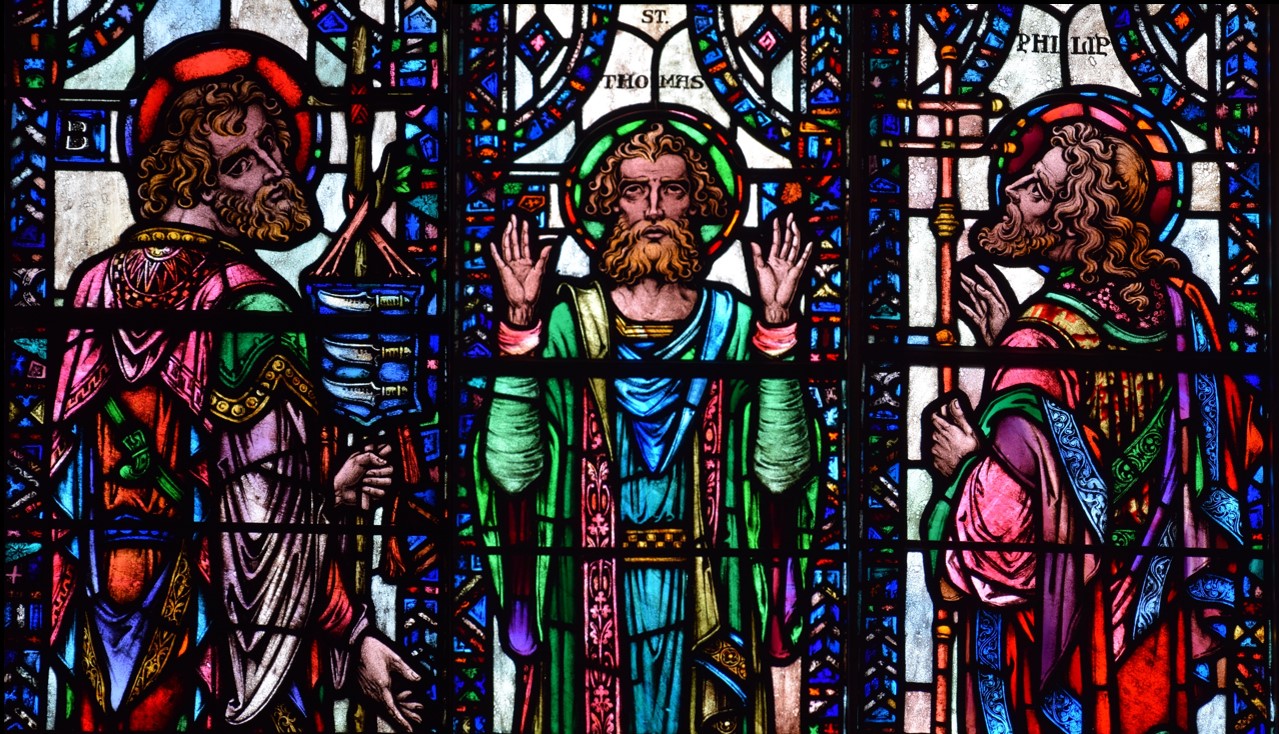 BARTHOLOMEW holds in his hands a cross to which is attached a shield with three flaying knives symbolic of his being flayed alive, while on his robe is introduced the fig, another of his symbols. The predella show in the small medallion Bartholomew trying to reason out with himself whether he should follow Jesus, and the larger subject shows him asking our Lord a number of questions before accepting the discipleship. The canopy subject shows Bartholomew at the miraculous draught of fish.

THOMAS has on his one side the spear, arrows, and stones of symbolic of his martyrdom, and the builder’s square. The predella shows Thomas as the doubter placing his fingers in the wound print of our Lord after the resurrection, and in the canopy Thomas the staunch followed of Christ who was willing to go down with Him at the raising of Lazarus even at the expectation of losing his life. The shield shows a church and a trowel, as Thomas is reputed to have built a church with his own hands.

PHILIP holds in his hands a cross and on his robe is woven the loaves and fishes, so symbolic of the prominent part he took in the miracle of feeding the five thousand. In the predella Philip is shown going to the aid of the eunuch, and the canopy shows the Greeks coming to Philip, their countryman, when they were seeking Jesus. The shield shows the basket containing loaves and the fishes. 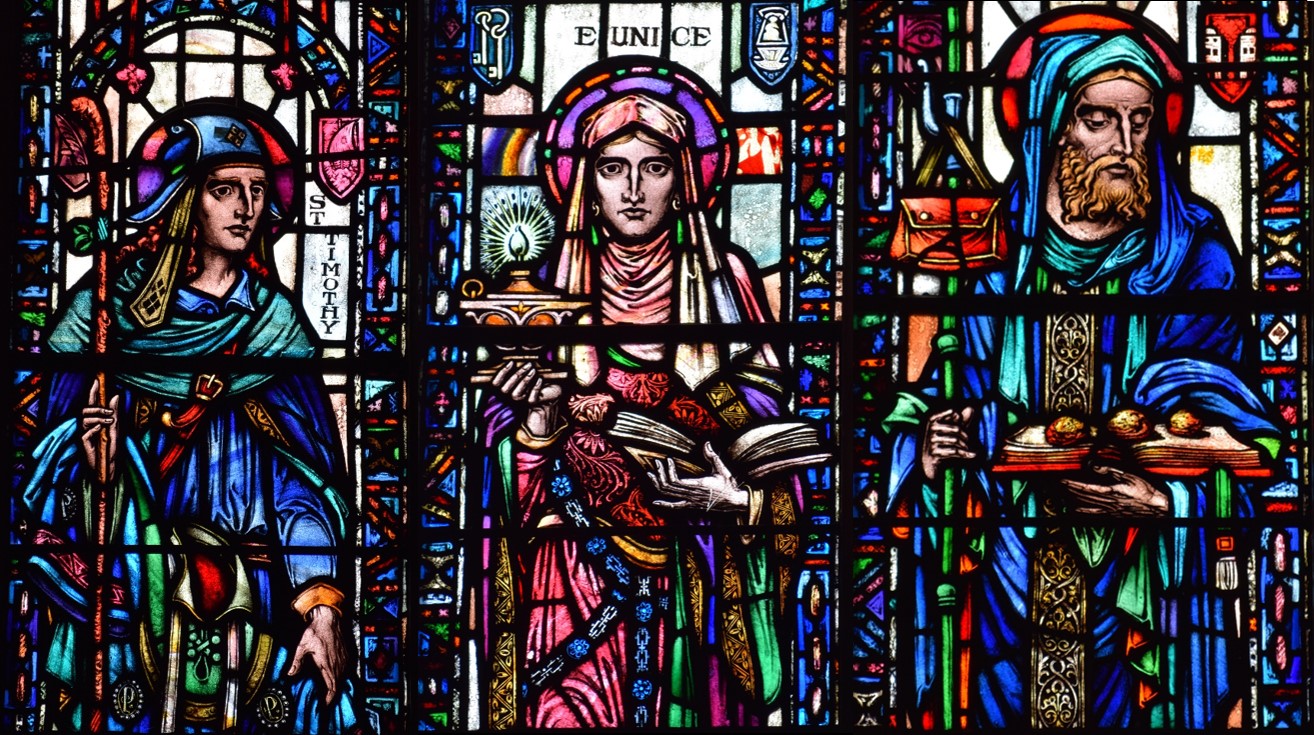 TIMOTHY holds a staff symbolic of his journeys, and in his hands Paul’s cloak, “The cloak that I left at Troas with Carpus, when thou cometh, bring with thee.” At his feet is a statue of Diana, the destruction of which he brought about. In the predella is Paul sending forth Timothy, charging him to be faithful servant and a good soldier. In the canopy, Timothy with Paul in prison. The shields show the quill and ink pot, symbolic of his work as a scribe, and a ship symbolic of his journeys.

EUNICE, symbolizing motherhood, holds in her hands the book and lamp, symbols of teaching and knowledge. In the predella is the young Timothy being brought up in the nurture and admonition of the Lord by his mother, Eunice, and his grandmother, Lois. In the canopy is shown Paul in Eunice’s home, helping her in solving the problems connected with Timothy’s upbringing. The shields show the keys and cradle, symbol of the housekeeper and mother.

BARNABAS holds in one hand the pilgrim’s staff and in the other, the book on which reposes three stones, which together with the flaming pyre at his feet are symbolic of his martyrdom. The predella subjects shows the young Barnabas and Saul together in school discussing religion while the canopy subject shows Paul in his blindness being led to the proper understanding of Christ’s teachings by Barnabas. The shields show the street called Straight and the eye, symbolic of Barnabas’ restoration of Saul’s sight.