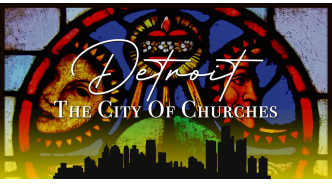 Historic Trinity is the primary featured congregation in a documentary that will be featured on PBS titled, “Detroit The City of Churches”. A red-carpet premier is scheduled for Saturday evening, December 10, 2022 at the historic Fillmore Theatre in Detroit, with the release of the film scheduled for Monday, December 12, 2022.

Detroit, at one time, had more churches per square mile than any other city in the country, serving a population from many nationalities of many faiths. The two-hour film, hosted by Chuck Gaidica and produced by Visionalist Entertainment Productions, takes the audience on an in-depth look at Detroit’s history from the perspective of 17 of Detroit’s most beloved and iconic houses of worship.

As part of this story, the audience will gain a deeper understanding of the origin of stained glass, various architectural designs, the significance of church bells, the complexity of many of the city’s historic organs that drive the Sunday services, Pewabic Pottery and the history of Detroit’s Eastern Market.

Click here for a preview that features Historic Trinity’s celebration of Christmas.